From childhood, I’ve been drawn to the glamour of the fashion industry. Any piece of scrap paper I could find I would use to draw tall, thin, beautiful women, flaunting all kinds of wild and wonderful outfits. I would collect pictures of models from magazines and stick them all over my bedroom wall. I thought one day I could be like that: tall, thin and beautiful.

Living to the full

When I realised I wasn’t going to be tall enough to cut it on the catwalk, I started modelling for local photographers, and, as my confidence grew, so did my portfolio. There were lingerie, abstract and urban shoots; it was great fun, and I finally felt like the women in the pictures I had drawn all those years ago. At that time, I knew that life had been great to me and that for a long time I had had everything I had ever dreamed of. But, in February 2017, my life was turned upside down

Although being a young single parent was a challenge, I loved spending time with my 8-year-old daughter, Maja. I was determined to continue working hard for our future, and I put a lot of time and energy into my career.

I was also living a very healthy lifestyle. I enjoyed sports and was a keen runner, jogging around 30 km a week. I especially enjoyed running for charity, and in 2016 I ran the Race for Life, accidently finishing in the race that started half an hour before mine! I was feeling fit and ready to fulfil a major ambition by competing in the London Marathon.

Out of the blue It was during a Tuesday-evening workout class, when everything seemed to be going as normal, that I first noticed something was wrong.

The sessions were always intense, but this particular time I really struggled to keep up. There wasn’t any pain; it felt more like I had caught a bug, and so I finished early and went home. I did not think my symptoms were anything serious, and I had no idea of what was about to happen. But, as the weeks passed, my symptoms didn’t, and I gradually became too weak to exercise at all. I even struggled to work my full-time job and was out of energy to spend on my social life.

" ‘I was fighting a losing battle’

Over the next few months, I stopped all training and was unable to work. My weight plummeted to nearly 45 kg, and I became almost completely incontinent. The horrible disease that I was fighting a losing battle against was at that point still undiagnosed. By the time my colonoscopy came around in late May, I was severely unwell. When the results came back, I was diagnosed with ulcerative colitis. Just a few weeks later, I had lost the ability to fight any longer, and I developed a severe bloodline infection. I was taken for surgery to remove all of my large bowel.

The support of a partner who is positive and accepting of your stoma can be a great help, before and after an operation. They can make it easier to come to terms with a new life and rebuild lost confidence. It is usually a good idea to include partners in the process from the earliest possible stage, so that the couple can adjust together and hopefully grow closer with the experience. However, sometimes partners will find it hard to adjust to changed circumstances, especially if a relationship is in its early stages when the operation takes place. Sometimes, it just takes patience for someone to come around. Other times, the relationship will end; although this is never easy, it is an opportunity to find someone who will appreciate you for who you are. I spent 6 whole weeks in the hospital recovering from both the infection and the operation. During this time, I came to terms with the fact that my independence had been taken away from me. I had gone from being fiercely independent to totally vulnerable. I couldn’t walk, brush my teeth or have a shower unaided. What was more, the intravenous steroids had made my body unrecognisable. I lost all confidence in myself, all because of something I couldn’t have prevented.

I was going to have to rebuild my life from the ground up. Luckily, Maja was being cared for by my family, but my concern then was always about getting strong enough to leave hospital and take care of her myself. I vividly remember the first time I was able to get out of bed on my own: I took a step outside of my room on the ward, and, with my fluid stand to lean on, I stood alone in that empty corridor. Standing there, I promised myself I would fight to recover.

Down in the dumps It was to be a long road, and I soon found out how challenging adjusting to an ileostomy was going to be. Even though I was loaded with information from the hospital, this didn’t answer all my questions. For a while, I’d still lie awake questioning whether I would ever be able to wear the same clothes or eat the same food again, never mind swim in a bikini or get back to modelling.

I was 27 years old, and I didn’t know anybody else my age with a stoma. This left me feeling totally isolated. I even occasionally found people discriminating against me for my stoma, such as when an acupuncturist declined to treat me, because she felt it would not be hygienic for other patients.

I hoped for support from my partner of 4 years, but he struggled to accept what had happened. He discouraged me to embrace the change and saw my ileostomy as something that should be kept private. It was heart-breaking to watch our relationship come to an end, and I began to believe my world had too. We separated in May 2018, and my mental health deteriorated rapidly, and, from a once confident young woman, I found myself hiding away from the world outside.

Having a stoma doesn’t have to be an obstacle for a modelling career, and the many ostomates making a success of it include:

• Blake Beckford, a British fitness model who has made it his aim to fight the stigma associated with a stoma

• Gaylyn Henderson, from Atlanta in the US, dispelled her fears that a stoma would end her career when she featured in a major underwear ad

• Jearlean Taylor, from Baltimore in the US, has had a successful career on the catwalk and in print with her two stomas

• Zoey Wright, from Cornwall, has won a world championship for fitness models I knew that to heal, in mind as well as body, I needed to be open about what had happened. I soon realised that, if I had made it this far, I could go a little further. As time passed, I started to concentrate on myself more and more. I began to enjoy myself again, whether folding origami, volunteering at a food bank or studying law.

Itching to break the stigma around stomas, I decided to apply for a beauty pageant. I did some research and found a connection with Miss Beauty UK, which is as a platform celebrating the beauty and diversity of humanity, focusing on mental health, hardship and a healthier world through charitable work and campaigns.

I was delighted to find out I had been accepted and began to prepare. In this time, I managed to get write-ups in a bunch of newspapers and a magazine, as well as three radio interviews—getting tongue-tied in front of the nation was certainly good practice!

‘I needed to be open about what had happened’

Choosing a gown was a real pressure, as it had to be gorgeous and practical. It would need to be lightweight, with space for my bum and my bag, and easy to get out of incase of a leakage.

Miss Beauty UK has enabled me to support people in my position. I wanted to reach out to young women with disabilities and change the way people view beauty. I look forward to making a difference where I can, and will compete In the national finals of Miss Beauty UK on 5 May 2019.

Rachael has been featured on:

More than a year on, I’m still recovering and have a long way left to go. But I have accepted a new reality with Sheila, my stoma. It has given me new eyes to see the world in all its glory and through its worst storms.

In the words of model Gia Carangi: ‘If I stopped today, it was still worth it, the pain that has burned and scarred my soul. It was worth it for having been allowed to walk where I’ve walked, which was heaven on earth, to hell on earth and back again’. 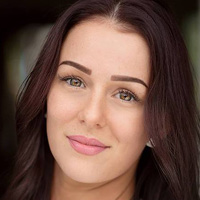 Rachael Kin is a mother-of one, a model and an ileostomate, as well as the author of the blog series ‘Cinderella with a Stoma’