Alannah-Jayne Simpson talks about how she learned to live with, and eventually love, her stoma

Getting a stoma can be an emotional journey, full of ups and downs, and with longer and shorter recovery times after the operation. For me, this was very much the case. At the age of 17, after 4 years of agonising symptoms, a colonoscopy confirmed that I had Crohn’s disease and ulcerative colitis. I was offered to have a stoma formed, but I put it off and chose instead to try every other treatment option available.

By June 2015, around 2 years later, I had been in hospital as an inpatient for 4 months, with only the occasional week or weekend pass to go home. Not only were the medications not working, I had contracted sepsis, and my large bowel had become completely rotten. Again, I was offered a stoma. To be honest, I didn’t really know what a stoma was, how it was formed or what it did.

However, this time felt different, and I felt more emotionally ready for the pain and frequent toilet trips to just be over. I had wasted so much of my life in hospital, and it was time to stop merely existing and start actively living life like any other 20-year-old.

She took some getting used to Just 2 days after developing sepsis, I was taken into the operating theatre, where my large bowel was removed and Lola the stoma was given life outside of my tummy.

At first, I was terrified, and the pain was not pleasant. During my first pouch change, I cried my eyes out.

But, from the very first day, my amazing stoma nurse helped me, and soon Lola and I were independent. The first week was hard, as I constantly drifted in and out of sleep, but that week I could eat normally and actually enjoy my food for the first time in ages. After just a week, I came home, and for a while life with Lola was great. She was so precious to me, and I was so grateful to haven given each other life.

Life with her was complicated

My journey since that operation has been eventful, to say the least. After 2 weeks went by, my rectal stump (the anus) started giving me quite a lot of pain, and again I couldn’t get off the toilet. After a long illness, a major operation and now this, it was no surprise that I was diagnosed with anxiety and depression. I went through a few more months of this, as I tried medications, in the form of suppositories, to no effect. In September 2015, I went in for another operation, this time to have my rectal stump removed and replaced with a ‘Barbie butt’.

Another 2 weeks after the second operation, I got a terrible infection and had to be hooked up to intravenous (IV) antibiotics. My dad drove me 2 hours to the hospital and kept me company for a while. But, just as he left, the IV line was started, and I began to feel my lips blowing up as if I had a lip plumper on. I rang my buzzer and I said ‘nurse, my lips feel a tad weird’.

Before I knew it, I had blacked out, and my curtains were closed. Soon, there were anything from 10 to 15 people crowding around my bed, and I was being given medication into my cannula every 5–10 minutes. Eventually, I was awoken from a dreamy sleepiness to hear that I just survived a severe allergic reaction and was lucky to be alive. Stoma surgery has given me the confidence to think about my future, and part of that has been starting my own blog. It’s a place to share not only my story, but also the stories of other people who have had to deal with a variety of illnesses. We share tips on relevant products, places and charities that offer support and ways to cope with pain. I also have an Instagram and Facebook page (Glitterygutsx), which have helped me find a real purpose in life helping others who are chronically ill, especially supporting people going through operations related to inflammatory bowel disease and getting a stoma. This has been a great way to meet people. After finding love for myself again, I also found love in my partner, who also has Crohn’s disease and a permanent ileostomy.

But we have had fun together

After that night, there have been other infections and illnesses, with various hospital trips. At last count, I’d been in for nine operations. But the worst was over, and the journey had really brought out the positives in life. I was no longer living my life on the toilet, and Lola, despite her occasional problems, has been great. And now, after 3 years, my wound is finally starting to heal.

I have started to really appreciate the simple, beautiful things in life, such as my yorkies, the outdoors and lifelong friendships, including those I’ve made with other chronically ill people. When I came home, I especially found joy in things like cuddling up in my own bed with a lovely cup of hot chocolate and my favourite film, Moana.

Even though I haven’t been so well, there are things I am able to do now that were impossible before. I’m able to sit on the sofa and cuddle my yorkies without having to go back and forth to the toilet, and I can go to places without having to worry and have panic attacks about where the closest toilet is. I can have normal conversations with friends and family, whether by video call or in person, and my diet isn’t limited anymore, I can eat most things anyone else can. What is more, I have battle scars to remind me daily how brave I am and how far I have come.

Among the many things you can do to gain confidence as an ostomate is finding the right accessories and routine. There are all kind of clothes, for men and women, that can provide support and give you the shape you want, many of which are available on prescription. High-waisted jeans, pouch cover and belts can keep your stoma secure and discrete. It took a while to find the right combination of products that worked for me, but I did, and it has made a real difference.

There are various companies that make specific products for ostomates: underwear for men and women from Vanilla Blush (available on prescription), stoma bag covers, high-waisted or stoma-adapted jeans, stoma belts and support boxers (available on prescription from Comfizz). Finding the right stoma delivery company is also important, as you want to be confident that you will get your products on time every month and have enough spares to see you through leaks and make up for anything that accidentally gets lost. My company has been great, with timely deliveries, plenty of free samples and a particularly amazing skin barrier spray (I haven’t doubted my skin condition since using it). Most importantly, their stoma nurse has been there for me with advice whenever I have had issues.

And we haven’t any regrets

The only regret that I have is not having agreed to a stoma years earlier. If you are new ostomate and you are struggling, please remember that the struggle is only for a short time, but that it forever shows just how incredible and brave you are. Our stomas are medals of our strength and courage. Anything is possible with a stoma, but remember to give yourself time. 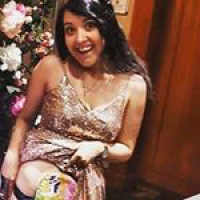